8BITDMC
The life and times of DMC no. 2100
Home A mixed bag this weekend
Post
Cancel

Clint came by Saturday morning as promised to get the clutch and transmission installed at last.

The clutch kit went in beautifully. 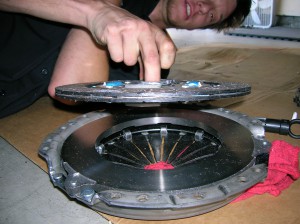 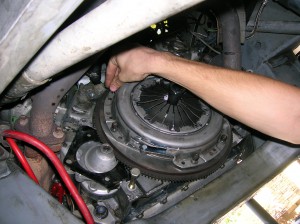 The transmission was a bit of a challenge to get lifted into place, however. We ultimately had to remove the hard coolant pipes from the lower half of the engine to the center of the car to make room. An hour or two of swearing and a bound up transmission jack later, the unit was reinstalled and we were ready to do all the little cleanup tasks. We reconnected the clutch and bled the system again and then spent another hour adjusting the shift linkage and crossgate cables. It was worth the effort as now the shifts are extremely precise. 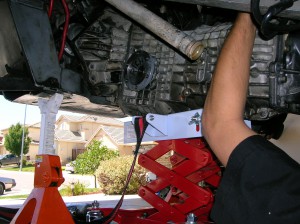 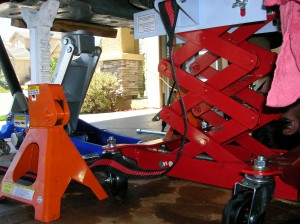 By 5:30, we had everything back together and in excellent working order. Here’s a shot of my car, waiting for Clint to pull out for our shakedown cruise. 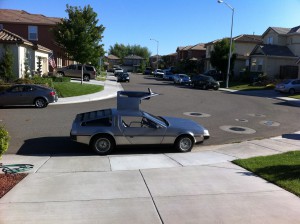 The cruise went spectacularly. We took a drive around my favorite back roads in Vacaville farm country. Everything seemed fine, so Clint packed his things and took off. I spent a half hour or so straightening up the garage so I could pull the car in easily, then took off for another short drive. The intention was to go get some dinner to celebrate a job well done. But that was not to be. As I pulled into my parking spot, the engine bay filled with a massive cloud of steam. I parked and shut the motor off. Opening the hood I found that literally every inch of the motor was coated in coolant and the bottle was bone dry. What the hell?! I bought a case of bottled water at BevMo and started pouring it into the bottle, but everything instantly dumped out the bottom again. The sun was setting and the temperature gauge was climbing rapidly, so I had no choice but to call a tow truck in shame. I’ve never called one before and hope never to do it again. Fortunately I was less than 2 miles from home, so it could have been worse. 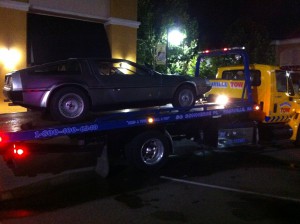 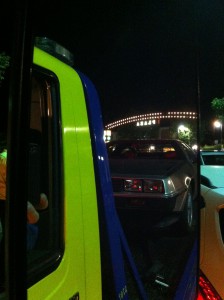 Arriving home, I immediately put the car on stands and investigated the issue. It only took 30 seconds with proper light and access to the bottom of the car to discover that the brand new heater control valve I installed in May had snapped in half. Well that’s just great. 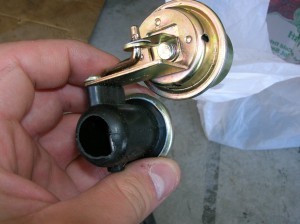 Fortunately I was able to find a crossover replacement at O’Reilly and get it installed in only about an hour. The valve that broke cost me $50 (since it included new hoses), and a brand new OEM one would have cost $20. The one I bought to replace the broken one was $40. Sigh. Here’s a photo of the three valves – the nasty one on top is the OEM valve, which lasted 30 some odd years and aside from being ugly, was working fine. The large one to the left is the new replacement, and the one to the right is the broken one. 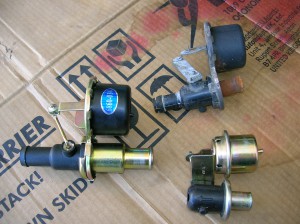 So, repairs completed and the coolant system refilled and re-pressure tested, I was ready for another test drive. It went well – no overheating or cooling issues. Transmission and shift linkage still feel excellent, but the motor had a bit of a jerky hesitation to it. I’m hoping that some coolant just found its way into the plug wells and will burn off. Arriving home, I sprayed down the motor and engine compartment to get all the sticky coolant off everything and it’s drying in the sun now. In another hour or so I’ll go for another quick drive and see if it still feels jerky.

Just a quick update. Still no clutch parts when I got home from work today, so I started putting the body back together. Got the quarter panel, T panel and rear fascia reinstalled. Panel alignment ...

So about a year ago, Clint, David and I removed my motor to do some preventative maintenance and a full re-seal. At the time, we completely rebuilt my transmission, installed a new clutch and hydra...