8BITDMC
The life and times of DMC no. 2100
Home All back together!
Post
Cancel

So after the drama last week, I got the motor all put back together and refilled with coolant. Pressure tested just fine. Hosed down the engine compartment, frame and body where the coolant had collected and decided to take another drive.

New problem: it’s just cranking and cranking and cranking and not starting. Eventually with enough cranking and pumping the throttle, it sputters to life. Great, now something is wrong with the cold start system. Fine, whatever – it’s running. Got on the road and realized my voltmeter was reading about a full volt low, and that the battery light was flickering like crazy. Now what?? Washed the car properly since the cursory hose-down had left it covered in hard water spots. Protip: plain, undiluted white vinegar is amazing for taking hard water off the stainless. Just wet down the whole car and rub gently with a microfiber towel, then wash it as usual immediately after (to eliminate the terrible smell.)

Last night I determined that the problem with the cold start system was just loose or dirty/corroded connections on the cold start valve and the thermotime switch. I pulled the connectors off, cleaned them, made sure they were making good contact and reinstalled them. Now the engine is turning over fine cold. On to the alternator.

The alt is very new, less than 18 months old. It had always worked fine but occasionally I would have to pull off the connector to the regulator and re-seat it to get the regulator to excite before starting the car. So this afternoon I re-tensioned the belt on the alternator and removed the wiring from the starter and alternator so I could solder a new connector on to the regulator wire. Well, when I say “new,” I mean that I put the 30 year old factory connector back and removed the 18 month old one. The original one seemed to have better weather packing and definitely had thicker wires. After reconnecting everything – voila! Flashing battery light is gone and the voltage is nice and steady at 14v even with the A/C, radiator fans, stereo and headlights on. Can’t beat that.

So now for another drive, this time on the highway. Drove up to Winters, which is just 2 exits on 505 and a nice easy drive; not to mention a fun little town to cruise. I was at a stoplight downtown, in the left turn lane and an older gent in a slammed Suburban pulls up next to me. I see him hang out of his window and start shouting at me and gesturing wildly. Great, I thought – either my motor is on fire or I’m about to get yet another lame ass joke. I roll down the window since it’s obvious that I saw him.

“HEY, YOU NEED A REPAIR MANUAL FOR THAT THING?”

What the hell, I think. It’s a busy night on the street and I doubt he’s going to murder me with his grandkids in the car. I follow him about 500 yards to his house, where he gets out and proceeds to tell me all about how he used to have a DeLorean but got into trucks in the 90’s, etc. etc.

“Hold on, I have something for you” and disappears inside the garage. 30 seconds later he comes out with these. 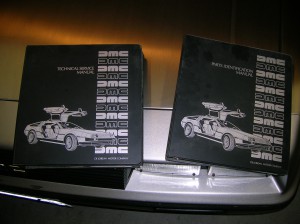 Turns out he really DID used to have one! He was very knowledgeable and an overall very nice guy.

So what started as an incorrect assumption and anticipation of a lame joke turned out to be a pretty cool experience!

Anyway, tomorrow it’s up to Sacramento to attempt to smog and hang out with David and Clint for the afternoon.

Just a quick update. Over the last week I’ve been tracking down a cold start issue with the engine. It was taking lots and lots of cranking to get it started when it was completely cold and/or it h...

So about a year ago, Clint, David and I removed my motor to do some preventative maintenance and a full re-seal. At the time, we completely rebuilt my transmission, installed a new clutch and hydra...