8BITDMC
The life and times of DMC no. 2100
Home Success at last!
Post
Cancel

Last night David, Ryan and Clint came over and we took another crack at sealing the oil pan. This time, instead of the DMC cork gasket, we used a hard fiber one from DPI. It cost a truly fantastic amount, but if you ask me you couldn’t put a price on just finally having this job done correctly.

The oil pan is a bit of a challenge on this car, since the row of bolts around the rear edge of it is totally blocked by the engine cradle. Not wanting to remove the whole engine yet again, we took the shortcut of just removing the engine mount studs and hoisting the motor up slightly with the crane. We only needed about 2″ of clearance, so it was pretty easy to do.

After draining the oil, we dropped the pan. It was immediately obvious that the cork gasket had suffered catastrophic and immediate failure. I can’t understand how anyone could use this part successfully – it’s complete garbage. 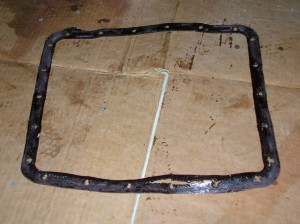 As you can see, it warped, compressed and split pretty dramatically. This occurred at no more than the 11 ft/lb of torque that the shop manual prescribed. In fact, the warping became obvious at around 7 ft/lb.

So, at nearly 5 times the price, we installed this gasket from DPI instead. 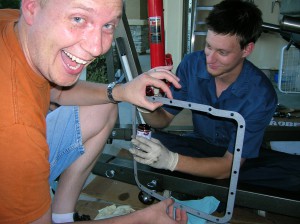 Here’s David, utterly thrilled about the fancy new gasket. Clint is choking something back, but I’m not sure what… 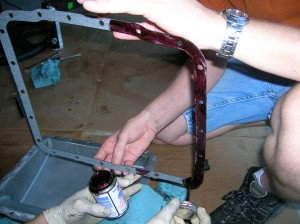 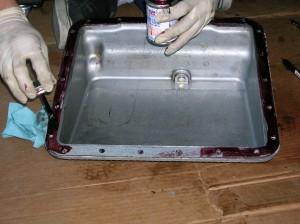 Applying High-Tack gasket sealant to both sides before reinstalling the pan. When I bought this stuff, I didn’t realize it also came in a spray can. That would have been much, much easier….

Anyway, after reinstalling the pan and re-sealing the 123 rocker cover with some Right Stuff on the fiber gasket we re-filled the oil and ran the motor for 20 minutes or so. Absolutely no oil appeared anywhere. We decided to call it a night and get some dinner.

This morning I checked under the car again, and there were no new drips on the cardboard or evident at any of the previously leaking spots on the motor. Taking that at face value, I reinstalled all the remaining parts of the rear end and the radiator duct and went out for a drive. The fuel pump seems to be working great, the new radiator kept things nice and cool, and the car was driving perfectly. Outside of a high idle condition, which appears to be due to a minor maladjustment on the throttle control arm. I’ll tackle that tomorrow.

So, I went for a nice long drive. Upon returning I cleaned up the whole garage, threw out all the old cardboard and put down fresh and pristine stuff under the motor. I’ll check back in a few hours and over the next few days to make sure no new drips appear, but I think we’ve finally got this thing sealed up – pun intended.

Clint came by Saturday morning as promised to get the clutch and transmission installed at last. The clutch kit went in beautifully. The transmission was a bit of a challenge to get lifted int...

So after the drama last week, I got the motor all put back together and refilled with coolant. Pressure tested just fine. Hosed down the engine compartment, frame and body where the coolant had col...

Just a note to say I haven’t forgotten the site..